When it comes to pie recipes, the crust is just as important as the filing. Now whether the pie crust should be thick-and-chewy or thin-and-crispy, is a matter of personal preference. But what's not up for debate is the fact that most pie recipes turn out better if the crust is pre-baked.

What is pre-baking exactly?

Pre-baking, or blind baking, is a process in which pie dough is placed into its pan and baked in the oven prior to filling. Pre-baking keeps the rising steam from puffing up the layers of crust during baking. In this method, a barrier (like parchment paper or tin foil) is placed over the soft dough and filled with about a pound and a half of dry, uncooked beans of some sort. You can buy specialty pie weights or "baking beans," but any type of bean will work. Using beans is essential as they hold the dough in its place and consequently prevent it from excessive shrinkage.

The bean filled crust is then placed in the oven for a set amount of time until the edges start to turn golden. The crust is removed from the oven, the parchment paper and beans are taken out and the crust is returned to the oven to crisp. Depending on the recipe, you may need to fully cook the crust, in which the bottom turns light golden as well. The beans can be reused for blind baking, but not for cooking.

Why should I pre-bake?

Pre-baking is a must if you're looking for a flaky pie crust. It's especially helpful for recipes with a wet center. Recipes for most tarts, pies and quiches call for pre-baking to ensure that the final product doesn't end up soggy. Pre-baking also prevents you from ending up with undercooked shells or undercooked fillings. For no-bake pie recipes, you definitely need to pre-bake, or else you'll wind up with an all-around goopy bite.

Other items that include a pastry crust, like galettes, don't always need to be pre-baked. These items are a bit smaller than your standard pies, and thus everything held within the confection has time to cook at the same rate.

Additional tip: To add shine and stability...create a moisture barrier to your crust by brushing it with egg whites before placing it in the oven for its "crisping up" time.

If you're like us, you've probably seen your grandmother use a fork to poke holes in an unbaked pie crust before it is filled. Otherwise known as "docking", this classic method is just another way to help the steam escape during the baking process. The challenge with the docking method is that it doesn't provide support for the sides of the crust; and if your filling is wet, it can leak through the holes resulting in a soggy bottom.

Pre-baking is an essential step to perfecting your pies and tarts. While it requires extra cooking time, the investment is well worth it to prevent soggy bottoms and blown out pie shells.

Looking for some recipes to get started? We have a section on our website with more than 120 pie and tart recipes. How have you experimented with pre-baking in the past? Leave your tips and tricks below!

Our friend and brand ambassador Bridget Edwards conjured up a decorated cookie... 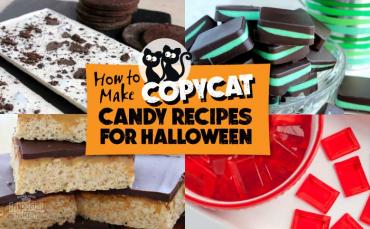 How to Make Copycat Candy Recipes for Halloween

If there ever was a time to learn how to make homemade candy, it’s now. Ghosts and goblins will...

Calico corn is the best corn, don’t you agree? It’s pretty and multi-colored – and doesn’t get...